The Memorandum of Understanding (MoU) between Bamboo Airways and Munich Airport is expected to strengthen the cooperation, promoting the exploitation of Vietnam – Germany direct routes and widening the Airline’s network to Europe.

The European market is determined as a key market which dominates the development roadmap of Bamboo Airways’ route network in particular, as well as tourism and investment products of FLC Group in general in 2020. To initially widen the international flight network to Europe, Bamboo Airways plans to operate the first direct flight connecting Vietnam – the Czech Republic from March 29, 2020.

These routes will be operated by Boeing 787-9 Dreamliner aircraft, the most modern, fuel-efficient wide-body aircraft as of now, with numerous outstanding utilities and services.

According to the MoU, Munich Airport will help promote conditions of the direct routes’ operation at a high level of safety and security. Information on air transport, travel industry, logistics and tourism projects between Vietnam and Germany will also be regularly exchanged and provided to support the development of the two routes.

The only five-star airport in Europe

Munich Airport is the main gateway to the city of Munich – Germany’s third-largest city after Berlin and Hamburg and is one of the most important economic, transportation and cultural centers in this country. Munich is both the second largest airport in Germany and the only 5-star airport in Europe.

101 airlines are operating in Munich Airport currently. In 2019, the Airport served 48 million passengers on 417,000 flights, taking them to 75 countries and 254 destinations worldwide. 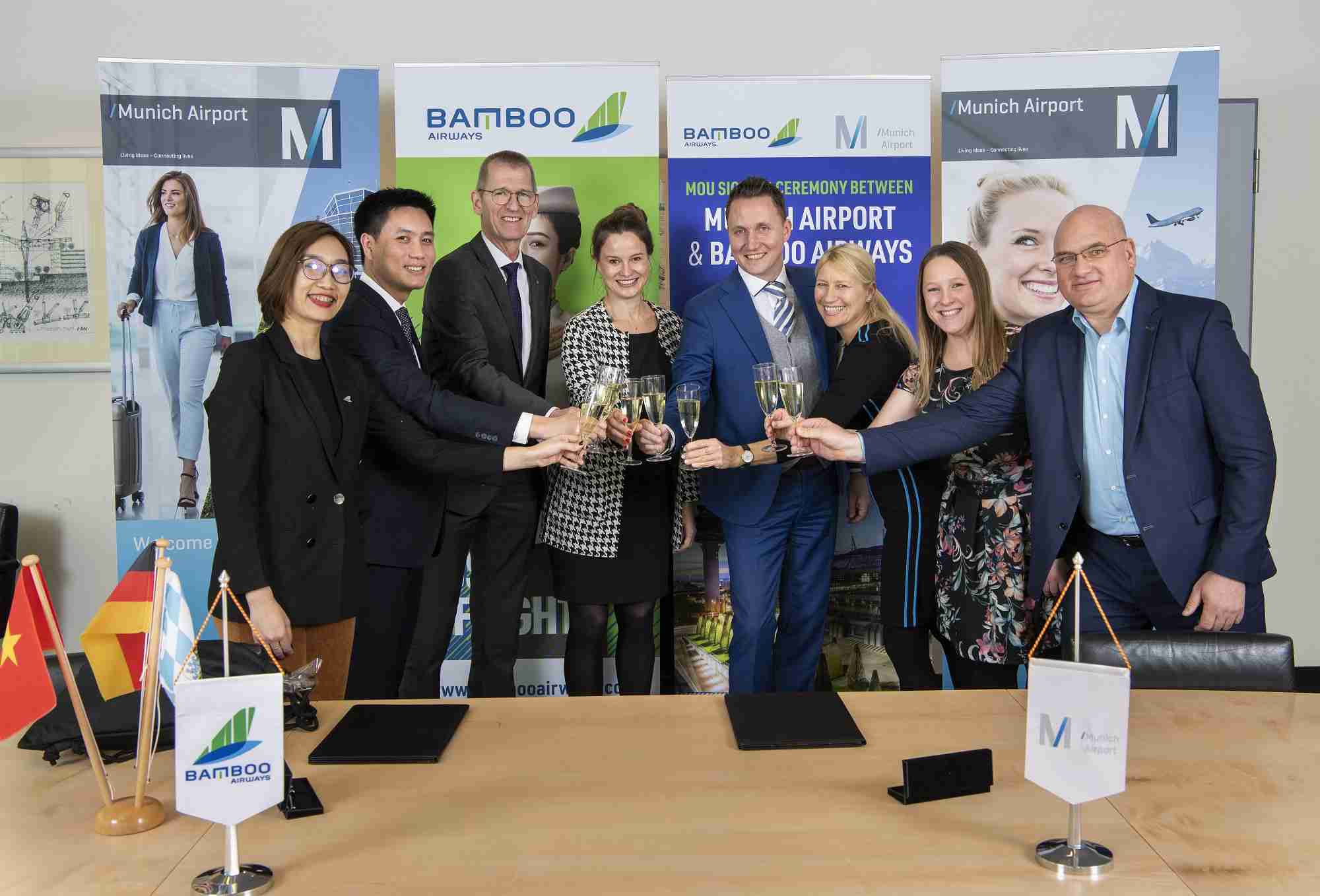 “The new connections to Hanoi and Ho Chi Minh City will give us direct access to this important future market for the first time. This is the excellent response to the steadily growing interest in Vietnam as a travel destination. And we are especially pleased that Bamboo Airways will serve these routes with the environmentally friendly Boeing 787 Dreamliner. This state-of-the-art aircraft is a perfect fit for Munich Airport’s climate strategy,” said Mr. Andreas von Puttkamer, Senior Vice President Aviation Flughafen München GmbH (Munich Airport).

The year 2020 will mark the 45th anniversary of the diplomatic relations between Vietnam and Germany – the largest trading partner and the fourth largest investor of the European Union (EU) in Vietnam.

Germany is also one of Vietnam’s great sources of tourists. According to the Vietnam National Administration of Tourism, in 2019, Vietnam attracted 2,168,152 European tourists, including 226,792 tourists from Germany – increasing by 6% on-year.

According to Embassy of The Socialist Republic of Vietnam in the Federal Republic of Germany, the Vietnamese community in Germany currently has about 176,000 people. The second generation of Vietnamese people in Germany are quite successful and highly appreciated by the local authorities.

The EU-Vietnam Free Trade Agreement (EVFTA) approved by The International Trademark Association  (INTA) of the European Parliament in January 2020 will be a catalyst for the strategic cooperation between Vietnam – Germany to achieve new and noticeable achievements in all fields: Politics – diplomacy, trade – investment, cooperation, security, defence, education and training, culture, tourism, etc. in the future.

“In addition to the goal of increasing visitor exchange, providing favorable travel conditions for German tourists to visit Vietnam, promoting exchanges and cooperation between the two countries, these direct routes are also Bamboo Airways’ new products in the process of connecting Europe with countries in Asia and Southeast Asia through the hub Vietnam”, said Mr. Bui Quang Dung. He also hopes that these will be solid premises for the Carrier’s next routes to Germany, as well as other countries in Europe in Q2, Q3/2020.

In 2020, Bamboo Airways is accelerating the process of opening new routes, targeting the network of 85 routes, including 25…

Announcement: All passengers are required to declare the health status when entering Vietnam
2020-03-07 09:45:09

Following the decrees from The national steering committee for COVID-19 prevention and control and the Civil Aviation Administration of Vietnam,…