Before the program “Fly Green”, environmental protection was one of the orientations throughout Bamboo Airways’ operation since the early days of its establishment.

Plastic materials are often considered one of the greatest inventions of mankind, but now, this is also an obsession because the convenience of plastic has become “a double-edged sword”.

According to the reported statistics, in the past 50 years, the amount of plastic consumed has increased by 20 times and is still expected to rise by 10 times in the next 20 years. Approximately 300 million tons of plastic waste is discharged into the environment each year, of which 8 million tons are dumped directly into the sea. Around the world today, 1 million plastic bottles are consumed every minute.

In response to the global campaign to repel plastic waste and extend the journey from “think Green”, “live Green” to “fly Green”, on June 5 – the World Environment Day, Bamboo Airways deployed the “Fly Green” program, bringing passengers the experience which was not only a mediocre flight, but also a journey to protect the living environment. 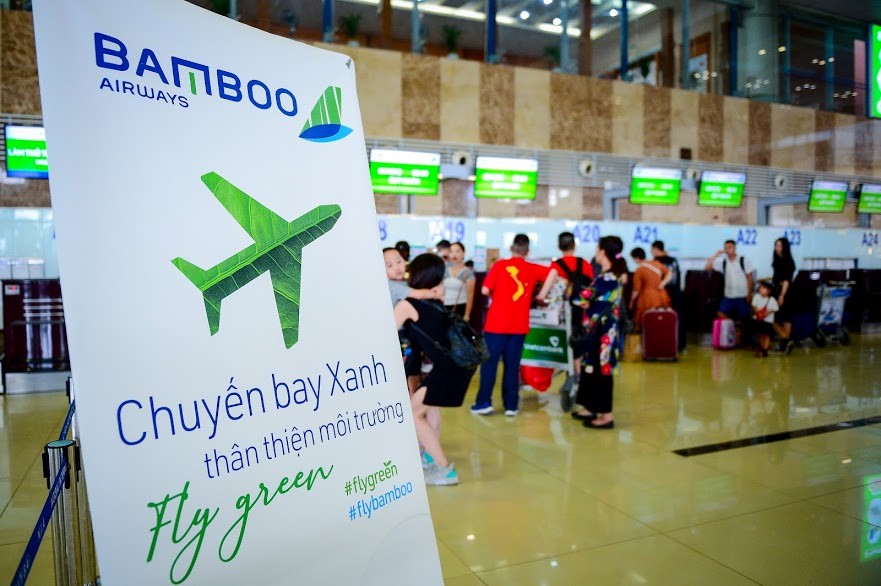 Subsequently, Bamboo Airways launched the first commercial flight “say no to single-use plastic” on June 5on the route from Hanoi to Quy Nhon, paving the way for the “Green” flights of this Airline.

The special feature of Bamboo Airways Fly Green flights is that single-use plastic products are replaced with the ones made of recyclable or biodegradable materials.

This is the first flight starting the plan for “greening” all the flights of this Airline operating in the country, including flights on domestic routes connecting big cities and famous tourist attractions across Vietnam to worldwide destinations, implementing the goal of reducing the amount of plastic waste in 2019.

Before “Fly Green” program, environmental protection is also one of the orientations throughout Bamboo Airways’ operation since the early days of establishment.

For its fleet, Bamboo Airways standardizes the most advanced and fuel-efficient aircraft currently available. It is the Airbus A321neo narrow-body line that can reduce up to 5,000 tons of emissions compared to the previous generation aircraft in a year, or the wide-body Boeing 787 Dreamliner aircraft that promises 20% fuel savings compared to other aircraft of the same size.

For ground services, in addition to the usual package of airline tickets, Bamboo Airways also offers customers non-luggage package. This option both saves significant costs for customers, and promotes a reduction in flight load, thereby reduces the amount of fuel consumed and discharged into the environment.

As for on-flight services, since the industrial meat production has caused numerous environmental problems as reported, Bamboo Airways offers more options for on-board meals. For example, vegetarian meals, in addition to regular meals, encouraging a healthy lifestyle, while reducing the consumption of industrial products.

For Bamboo Airways, environmental protection is not only an option, but a vital principle

“The flights that say no to single-use plastic are under Bamboo Airways’ long-term green development strategy. Pioneering to pursue this idea in Vietnam, we expect that the positive impact of the campaign to be not limited to only the scope of Bamboo Airways’ operation or in the behavior of the passengers on the flight, but also the mindset of Vietnamese people”, said Mr. Thanh.

Officially opened on June 1, 2019, Bamboo Airways Ticket Office at 30 Trang Tien is within an important strategy that…

Having served as the Deputy General Director of Bamboo Airways just since May 2019, Mr. Truong Phuong Thanh is responsible…