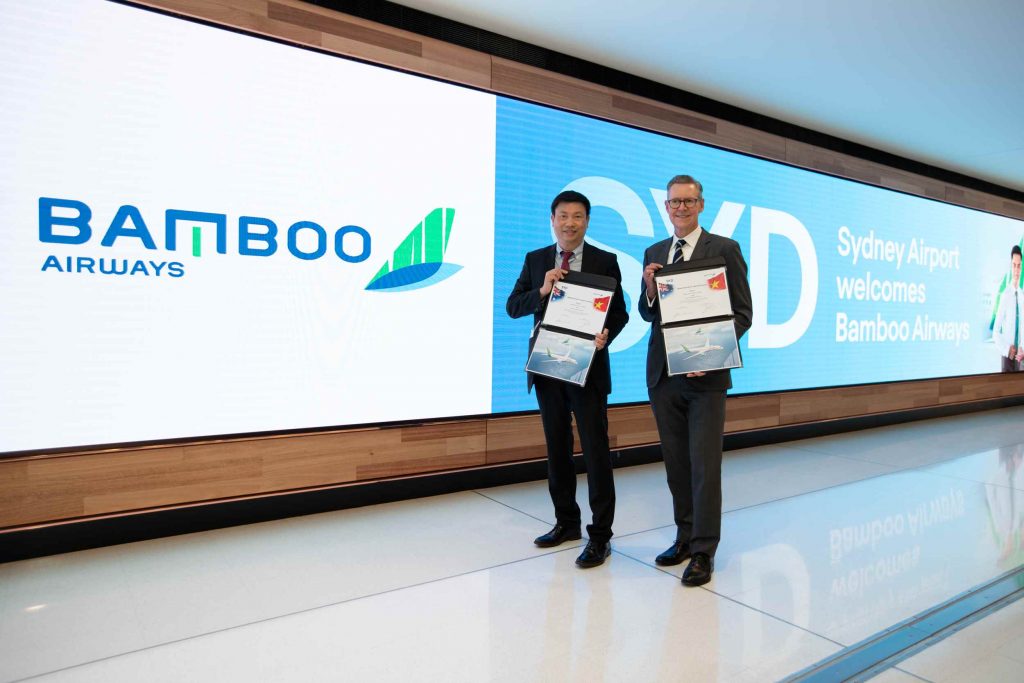 February 28, 2022 – Australia. Sydney Airport and Bamboo Airways have today inked a Memorandum of Understanding (MoU) and announced a new, twice-weekly HCM City – Sydney service from March 29, in a move that will boost tourism and provide greater connectivity between the two most populous cities in Australia and Vietnam.

The new service capitalizes on a fast-growing market and what was one of Asia’s most popular tourism destinations prior to the pandemic and will grow to a four-weekly service by the end of 2022, subject to demand.

Bamboo Airways’ nonstop HCM City – Sydney route will help shorten travel time to only approximately 8 hours, less than over 7 hours compared to transit flights. The service will be operated on modern next-generation Boeing 787-9 Dreamliner with the utmost fuel efficiency and many outstanding amenities.

Sydney is the largest, oldest, and most cosmopolitan city in Australia. It’s also the jewel in Australia’s tourism crown with various world’s popular destinations such as Sydney Opera House, Sydney Harbour, etc.

According to the Vietnam National Administration of Tourism, the number of Australian tourists to Vietnam in 2019 reached over 383,000, just behind the U.S., Russia, and some Asian countries. In 2018, there were 562,000 people traveling directly between Vietnam and Australia.

Not only will the new HCM City – Sydney operation directly fulfill the increasing air travel demands but also promote the connection between Australia and Southeast Asia in every aspect, thus creating opportunities for passengers to access Bamboo Airways’ international 5-star oriented service. 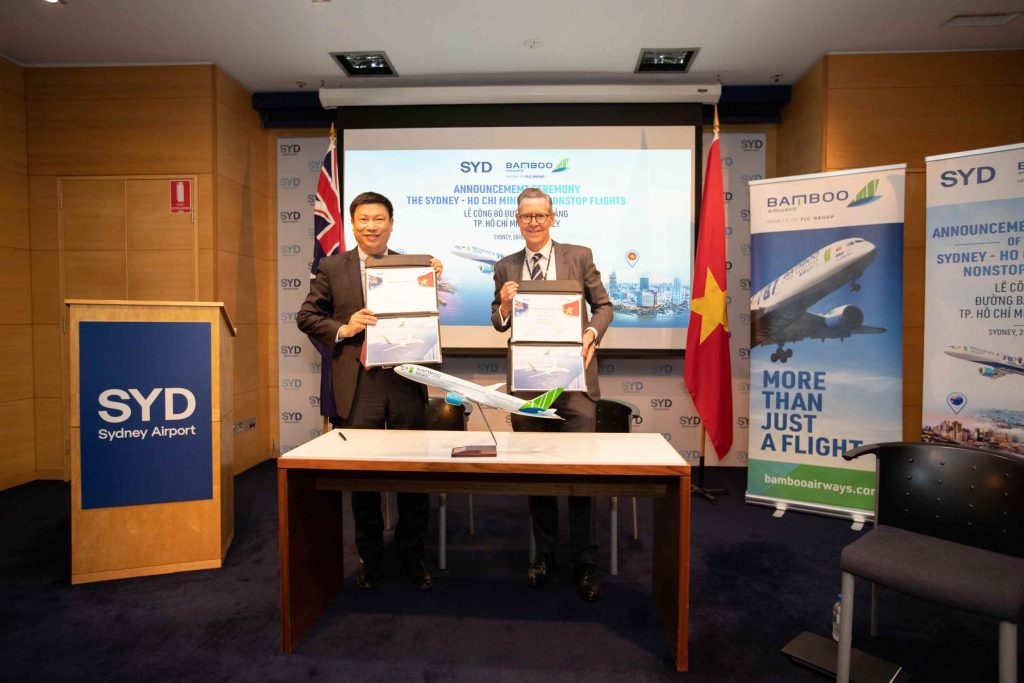 Today’s announcement was marked by a ceremony at Sydney Airport, where representatives from the airline and Sydney Airport signed an MoU to work together on opportunities to drive increased tourism, economic growth, and opportunities for cultural exchange between Sydney and Ho Chi Minh City.

“Vietnam is an incredibly popular destination for Australian leisure travelers and with a big Vietnamese diaspora in Sydney, it makes sense to build greater connectivity between our two cities.

“There is so much to love about Vietnam, and with this service increasing tourism capacity by more than 60,000 seats every year, I know many travel-starved Australians will be keen to get out and see one of the most exciting destinations in Asia.” 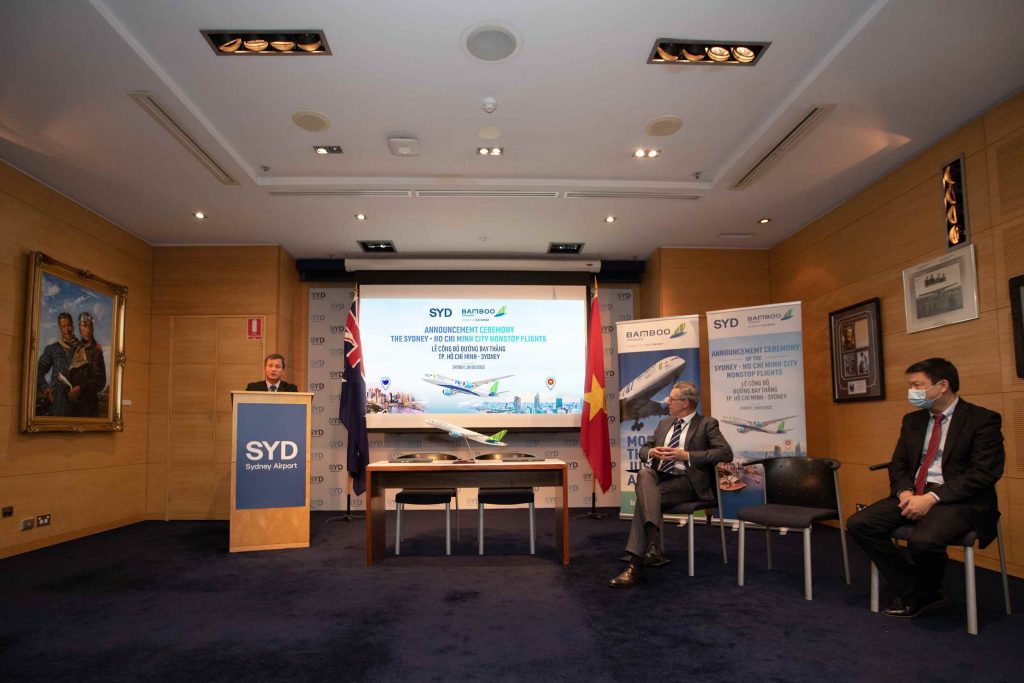 Dang Tat Thang, CEO of Bamboo Airways, expressed his delight: “We are thrilled to be the first new international airline at Sydney Airport soon after Australia lifted international travel restrictions.

Bamboo Airways expects to provide a world-class flight experience to Australian travelers as well as the large Vietnam diaspora in Sydney, thus fulfilling the considerably increasing market demands in the post-pandemic period.

With the valuable support of Australia’s busiest airport and the NSW government, we are committed to making the new regular nonstop Sydney – HCM City service a great success for both sides and look forward to further development in our partnership.”

Bamboo’s arrival into Sydney was supported by the NSW Government’s Aviation Attraction Fund and is the first new international service to be confirmed since the fund was announced in October 2021.

Minister for Enterprise, Investment and Trade, Minister for Tourism and Sport, and Minister for Western Sydney Stuart Ayres said NSW was a key destination for Bamboo Airways, with more than 123,000 Vietnamese visitors arriving in Australia in 2019.

“NSW has the highest percentage of Vietnamese-born population in Australia and with the reopening our international border we can once again look forward to welcoming the family and friends of our sixth largest migrant community,” Mr. Ayres said.

“Our airports are the gateway to our state, so supporting the return of airlines to them through the Aviation Attraction Fund is key to our recovery roadmap and achieving our goal of making NSW the premier visitor economy of the Asia Pacific.” 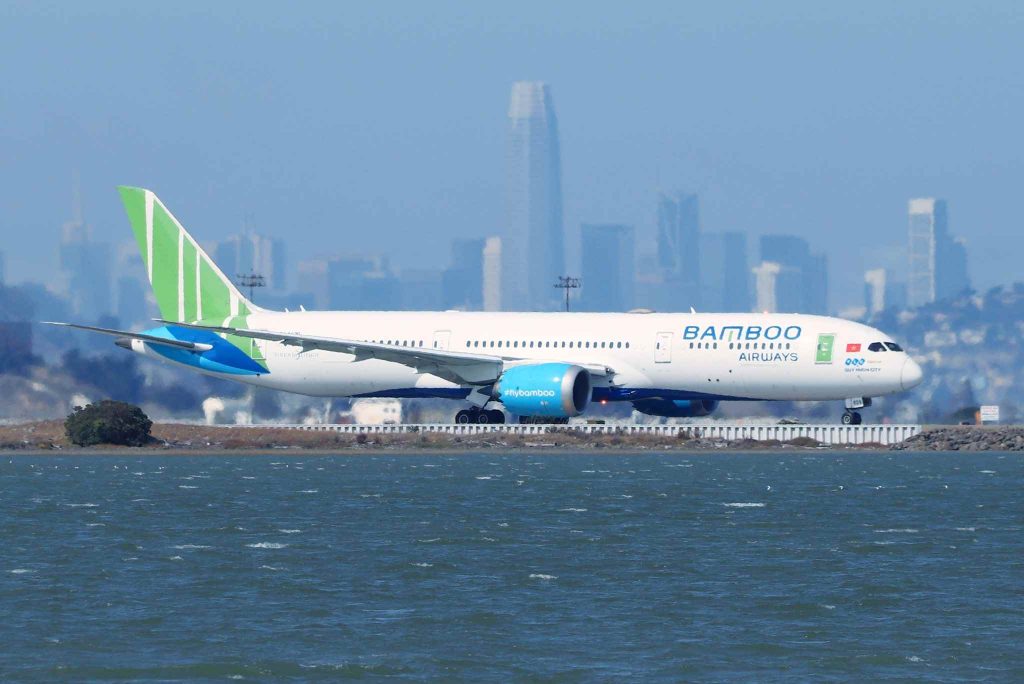 With increasing flight networks to Australia, US, UK, and many other countries, Bamboo Airways has constantly affirmed its operational capacity.

As global aviation is assessed to strongly rebound this year, Bamboo Airways is targeting an expansive network of nearly 40 international routes.