HomepageCompanyPress and newsPress releases The Civil Aviation Authority of Vietnam: Bamboo Airways Should Fly Directly to US Soon, Affirming Its 5-star Airline Orientation

The Civil Aviation Authority of Vietnam: Bamboo Airways Should Fly Directly to US Soon, Affirming Its 5-star Airline Orientation

According to Mr. Vo Huy Cuong – Deputy Director of The Civil Aviation Authority of Vietnam, the exploitation and opening of a direct route to the US will help Vietnamese airlines affirm their international brands, raising their competitiveness in the market, especially contributing to political and diplomatic missions, strengthening the international economic connection and integration between Vietnam and other countries.

Speaking at the event, Mr. Vo Huy Cuong – Deputy Director of Vietnam Civil Aviation Department said that in order to be able to operate a direct route to the US, Vietnam’s aviation industry, specifically, the Civil Aviation Authority of Vietnam and domestic aviation enterprises have been simultaneously implementing tasks including conducting market research, determining effective flying products, achieving a Category 1 aviation safety rating from the US Department of Transportation’s Federal Aviation Administration (FAA), as well as preparing technical equipment, mastering techniques of exploiting and maintaining the new generation aircraft to be able to carry out flights over the Pacific to the US. 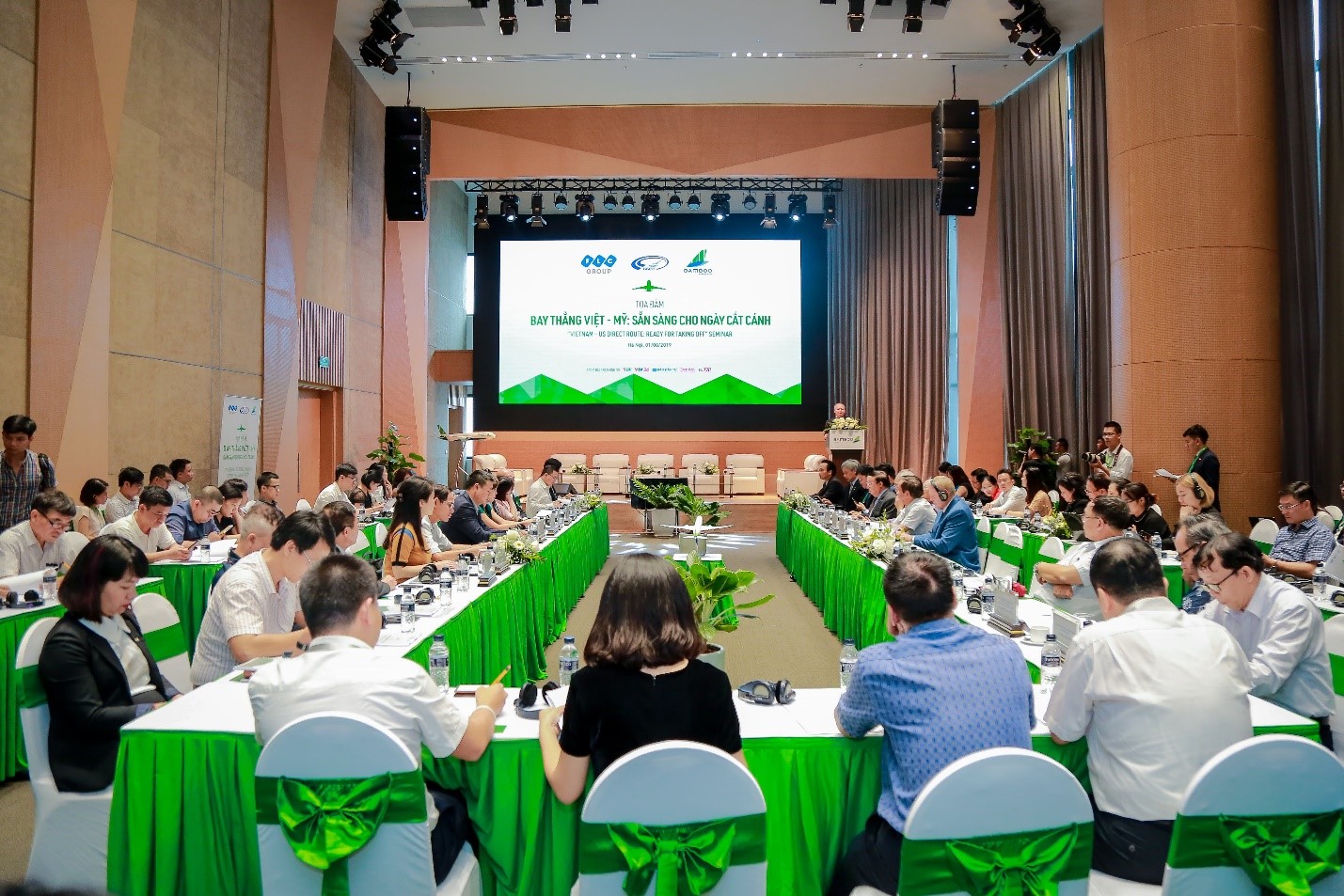 “Vietnam – US Direct Route: Ready for taking off” Seminar

According to Mr. Vo Huy Cuong – Deputy Director of The Civil Aviation Authority of Vietnam, the exploitation and opening of a direct route to the US will help Vietnamese airlines affirm their international brands, raising their competitiveness in the market, especially contributing to political and diplomatic missions, strengthening the international economic connection and integration between Vietnam and other countries.

“Along with the efforts of domestic airlines, we also have a strong belief that Vietnam – US direct route will soon be opened and officially put into operation in the near future. In particular, we greatly appreciate Bamboo Airways’ efforts. Bamboo Airways is proposed to open a direct route to the US soon, affirming that its orientation from the beginning is to become a 5-star airline, providing both domestic and international air services,” said Vo Huy Cuong.

At the seminar, Mr. Trinh Van Quyet, Chairman of FLC Group answered the question “Why does Bamboo Airways want to open a flight route to the US?”. First, in terms of potential capacity, Trinh Van Quyet analyzed that Vietnam’s population is nearly 100 million, while that of Singapore – a rare Asian country having direct route to the US – is only 5.8 million people.

“Singapore Airlines has to search for customers all over the world, including Vietnam, while the number of Vietnamese in a US state such as California is half of Singapore’s population. It’s unable to say that Vietnam-US direct route has no potential and no customers,” he pointed out.

Bamboo Airways Chairman mentioned the problem of cost, assuming that in case there is no plane, Bamboo Airways has to lease a Boeing 787-9 Dreamliner, the total cost for leasing, fuel for a round trip flight, maintenance and technical problem, ground services and others are about VND113 billion (about USD5 million)/month for a Boeing 787-9 Dreamliner with the frequency of 17 flights/month.

In terms of revenue, if Bamboo Airways ticket price is USD1,100 for about 240 seats, the Airline will suffer a light loss. However, if tickets are sold at the price of USD1,300, the estimated profit is about VND8.4 billion (more than USD360,000). This price is still lower than the average price that airlines in the region deploying direct flights to the US are offering. Thus, the loss-and-profit problem will completely depend on the fare.

“If we lease an Airbus 350 with more seats, we can get more than VND28 billion (about USD1.2 million). If we reduce the number of flights and accumulate guests, the interest is even greater; or if Bamboo Airways passes a third country to catch more guests, the economic efficiency is greater than what I have just calculated. In case we receive a plane in October as signed with Boeing, we will certainly have more interest,” Trinh Van Quyet assumed.

Analyzing the capacity of passengers for the air route, Mr. Andy J. Gayer – Boeing Chief Representative in Vietnam said that there was a big difference between the market today and that in the past when US airlines had to stop exploiting this route.

“Vietnam has two markets that have not been served, so there are nearly 700 passengers/day currently cannot fly directly, equivalent to nearly two planes, totally enough to exploit,” Boeing Chief Representative at Vietnam said.

“Platform” from the whole economy

As for the information given by Mr. Trinh Van Quyet, Mr. Vu Tien Loc, Chairman of Vietnam Chamber of Commerce and Industry (VCCI), said he appreciated the “straightforward and entrepreneurial approach of Bamboo Airways”. He believed that even in the early years, the route may not generate interest immediately, but the overall benefits of the FLC Group are undeniable. However, the level of success of the route exploitation will depend on the “platform” of the entire economy.

According to Mr. Loc, firstly, Vietnam is aiming to become a factory of new generation FDI enterprises, a lot of products must be transported by air. Therefore, there is an enormous demand for air cargo transportation.

Secondly, Vietnam is also known to be among the world’s most visited countries. It is one of 18 countries with great potential for tourism, opening up a lot of potential for aviation. Thirdly, Vietnam has 2 million overseas Vietnamese. In the US, their demand for flying to their home country is great, as well as the number of people from Vietnam to the US visiting their relatives is not small.

Fourthly, the Americans coming to Vietnam to visit former battlefields are also the tourist segment that should be paid much weight on. Fifthly, the United States is home of many famous universities in the world, more and more Vietnamese students coming there to study. Finally, America is also the cradle of the Start-up movement so it attracts a lot of start-up entrepreneurs from countries including Vietnam.

“All of these things open up great potential for the aviation market, especially for a Vietnam – US direct route,” Mr. Loc listed.

Sharing a cautious point of view, Dr. Le Dinh Tinh – Director General of the Institute for Foreign Policy and Strategic Studies – Diplomatic Academy of Vietnam noted 5 issues to be solved about opening a direct route to the US.

The first is the legal issue which has never been simple in the US. We must accompany US law firms to solve this problem. The second is the story of security. Earlier, the Obama administration said terrorism was America’s top threat, especially to the aviation industry, but the current concern is network and the airport security.

Third is the economic problem since many unknowns such as raw material prices, airport congestion, etc. have not been taken into account. Fourth is a competition with other airlines with good services. Finally, the issue of human resources, and personnel training.

“Vietnam has probably overcome a period of risk reduction, and it’s time to take risks in some cases because our capacities are different from these in the past. The more risks we take, the more businesss opportunities we have,” Mr. Tinh concluded.

With this certificate, Bamboo Airways will step by step take the initiative in training specialized human resources for aviation exploitation,…