“I am glad that Bamboo Airways of FLC Group has participated in this market. It  will certainly be an airline to transport a large number of passengers and meet Japanese people’s strict requirements”, the Ambassador expected.

At the event, Mr. Vu Hong Nam, Ambassador of the Socialist Republic of Viet Nam to Japan, said that the relationship between Vietnam and Japan had reached a new peak and continued to grow strongly.

Mr. Vu Hong Nam, Ambassador of the Socialist Republic of Viet Nam to Japan spoke in the Seminar

This stable and substantive relationship is built from many positive factors, including a favorable political foundation, the Vietnamese government’s certain commitment to help create a favorable environment for bilateral trade, and especially the special connection between the two countries’ peoples, proved by the large number of up to 1.2 million visitors traveling between the two countries every year.

“I am glad that Bamboo Airways of FLC Group has participated in this market. It will certainly be an airline to transport a large number of passengers and meet Japanese people’s strict requirements”, the Ambassador expected.

Mentioning the MOU signing ceremony between Bamboo Airways and two big Japanese localities, Fukushima and Ibaraki on July 1, Ambassador Vu Hong Nam regarded it as the beginning stage and believed that many other localities in Japan are also hoping to achieve similar MOUs.

“I will support Bamboo Airways in building a legal foundation with localities to participate in the current potential aviation market,” the Ambassador said.

“We have the ability to offer multiple combo packages with international standard services at very attractive prices for both domestic and international customers,” he pointed out.

“Bamboo Airways expects to bring customers diverse experiences, and to be remembered as a 5-star service-oriented airline of hospitality,” emphasized Trinh Van Quyet.

Vice President and Deputy General Director of Bamboo Airways Duong Thi Mai Hoa affirmed that Japan was one of the Airline’s key destinations.

In the first stage, Bamboo Airways will boost flights in the form of charter flights, serving the great tourism and trade exchanging demand in many areas between the two countries in the context that the provincial airports have not been fully exploited.

“Carrying out charter flights also helps Bamboo Airways initially research and understand the market demand so that it can identify destinations and locations to open regular flights in the coming time,” said Bamboo Airways Vice Chairman. She also said that beside charter flights, the airline had started to research the process and procedures to open regular flights.

Providing investors in Japan with the information about Bamboo Airways, Ms. Vu Minh Chau – Chairman of VJSC – the General agent of Bamboo Airways charter flights in Japan – said that with the 5-star-oriented service, Bamboo Airways offers suitable seats and facilities for long routes.

In addition to the advantages of preferential packages combined with tourism and aviation, Bamboo Airways has shown its “green” mark thanks to eco-friendly flights that say ‘no’ to aviation plastic.

VJSC leaders pointed out that the status of Vietnam’s tourism products has remained virtually unchanged over the past years, leading to the few choices for tourists when traveling to Vietnam, most destinations are familiar to people such as Hanoi, Da Nang, Hue, Ho Chi Minh City. 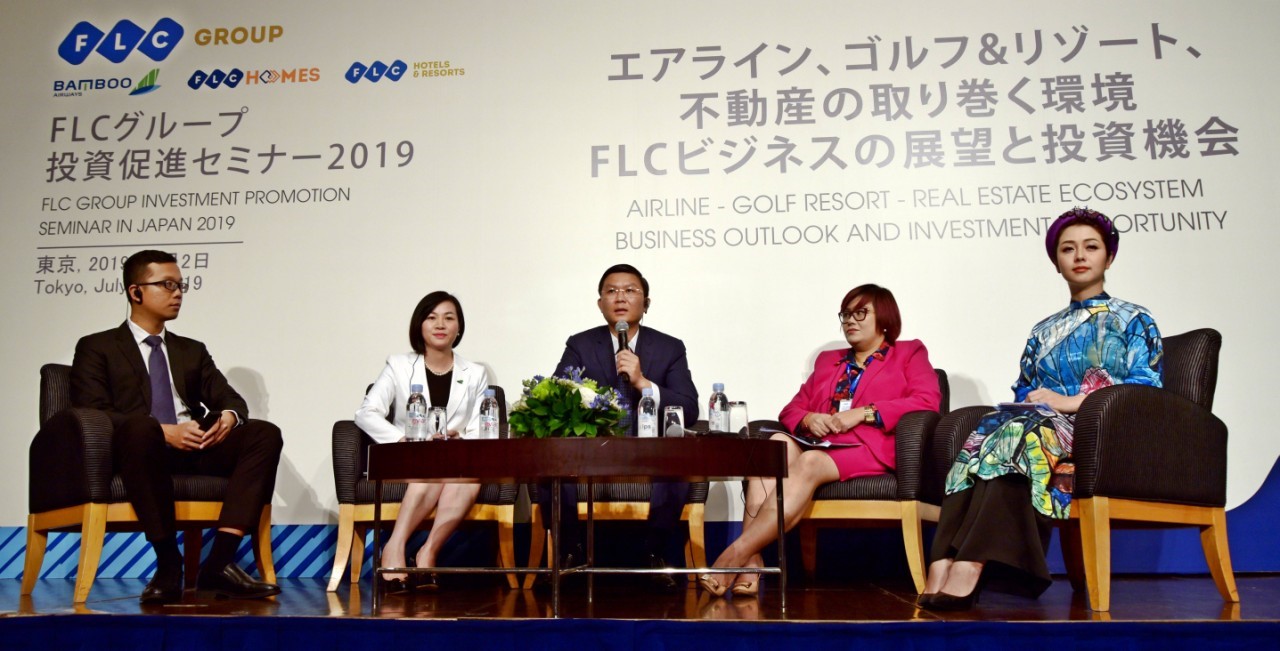 Ms. Duong Thi Mai Hoa (2nd from the left) in the discussion

“Meanwhile, sea tourism is a strength of Vietnam tourism with long coastlines and diverse landscapes, but are still unknown to many Japanese people,” Ms. Chau said.

“With the ability to exploit charter flights to Vietnam, VJSC and Bamboo Airways believe that it is possible to bring Japanese travel agents new and attractive options. For example, new popular destinations in Vietnam such as Ha Long, Nha Trang, Quy Nhon and Phu Quoc have not been exploited at full potential in Japanese market,” emphasized Vu Minh Chau.

A series of events

The seminar is a part of a series of activities to introduce, promote Bamboo Airways brand and services, as well as to comprehensively expand the Airline’s activities in Japanese market from June 28 to July 2, 2019, beside the visit to Japan of Prime Minister Nguyen Xuan Phuc and Vietnam’s high-level delegation according to the invitation of Japanese Prime Minister Shinzo Abe.

On July 28, Bamboo Airways attended a Press conference to introduce the flight route to Fukushima and launch its General Agent for its charter flights in Japan – Vietnam – Japan Services and Trade Company Limited Copy (VJSC).

Coordinating with VJSC and Vietnam Travel and Marketing Transports Joint Stock Company (Vietravel), Bamboo Airways signed a MOU to cooperate with Ibaraki and Fukushima prefectures on pushing the construction and promotion of tourism products, and carrying out direct charter flights with these two provinces.

To strengthen the process of brand and service promotion, as well as the comprehensive expansion of operations in the Japanese…

With the on-time performance rate (OTP) of 93.8%, Bamboo Airways is the most punctual airline in the industry for the…