On September 21, 2021, Bamboo Airways officially introduces AVIAWORLD (AVIAREPS JV) as its official General Sales Agent in the US and launches the nonstop flight network connecting the two countries.

The event is held under the witness of the Vietnamese President Nguyen Xuan Phuc, with the presence of Bamboo Airways’ CEO Dang Tat Thang and representatives, Leslie J. Machado Managing Director of AVIAWORLD, and Bamboo Airways’ partners in the US.

The ceremony is an important part of Bamboo Airways’ business trip to the US, among a series of activities such as signing cooperation agreement with San Francisco International Airport and Los Angeles International Airport, opening the Representative Office in the US, working with Boeing aircraft manufacturer, signing with CFM International, signing a $2 billion deal with GE Aviation, and especially launching the first special authorization flight connecting Vietnam – US on September 23.

AVIAWORLD and the AVIAREPS AG Group is the leading Airline & Tourism Representation Global organization with more than 27 years of experience in representing various global partners through its 64 offices in 47 countries. As the General Agent of Bamboo Airways in the US, AVIAWORLD will support Bamboo Airways in addressing complex local procedures and policies related to the airline’s operation and services; promoting sales and marketing through agent selection, sales network expansion, market research to propose distribution plans and sale policies; managing issues related to customer service and flight operation.

“Partners and agents are not only important companions to narrow the gap between Bamboo Airways and customers, but also an indispensable factor contributing to the commercial success of the nonstop routes from Vietnam to the most demanding aviation market in the world,” said Dang Tat Thang, CEO of Bamboo Airways. With AVIAWORLD’s scale, prestige, and extensive network, Bamboo Airways expects active support in connecting the airline with customers in the US as well as neighboring areas.

As for Bamboo Airways, the airline is committed to providing maximum support in all aspects, implementing policies for the mutual benefit, thereby creating opportunities to expand the flight network, fulfilling travel demands between two countries, and promote investment opportunities, trade relations, and bilateral exchanges.

“We are honored to be appointed to serve as Bamboo Airways Representative and Partner in a strategic market like the US. Our first priority is to introduce the unique Bamboo Airways Brand to Trade Partners and Travelers across the US in preparation for history making non-stop services between Vietnam and the US,” said Leslie J. Machado, Managing Director of AVIAWORLD. 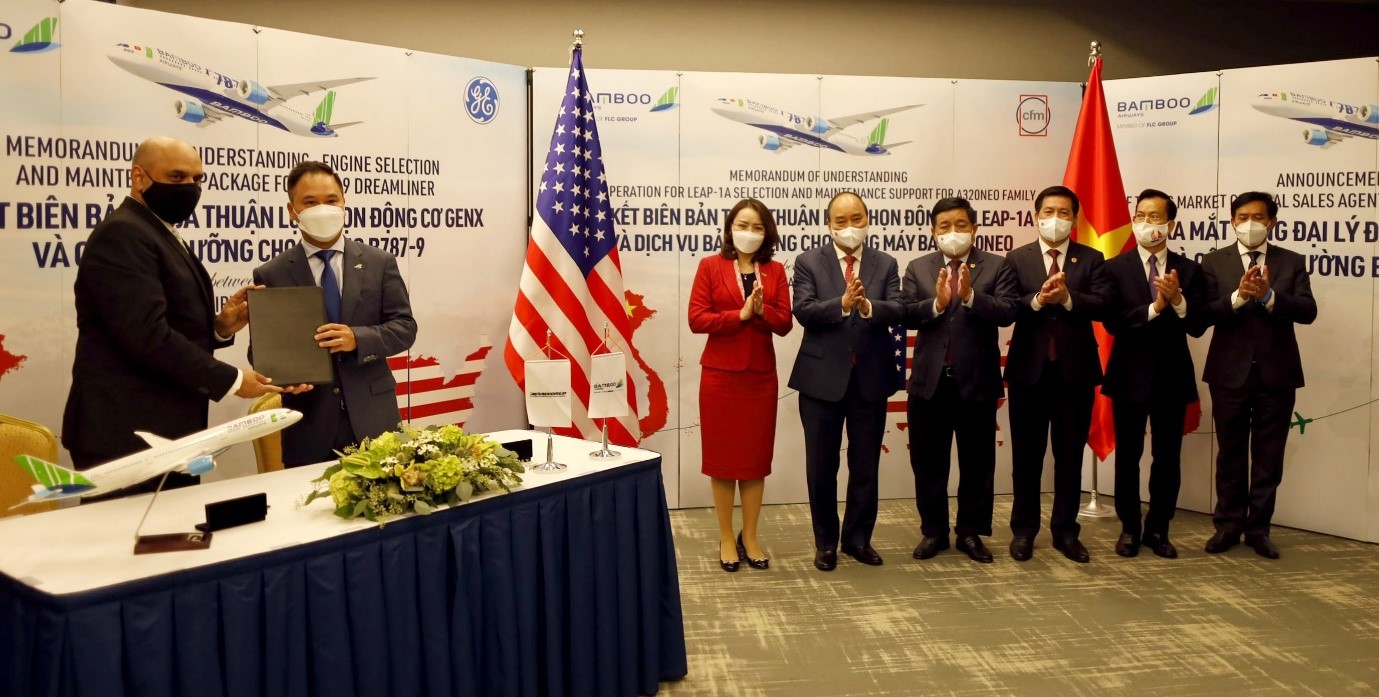 Within the event framework, Bamboo Airways announced the first of its special authorization flights between Vietnam and the US on September 23 from Hanoi to San Francisco and return. This shows Bamboo Airways’ fulfilled standards and ability in ensuring operational safety and services for the nonstop route connecting the two countries.

This is considered an important milestone for a private airline like Bamboo Airways in the journey of conducting regular nonstop commercial flights between Vietnam and the US.

Nonstop flight network connecting the two countries is of great potential as there are more than two million Vietnamese diasporas living, working, and studying in the US, leading to the increasing travel demands for trade and exportation. The US is a leading country in the economy and tourism industry with the top number of visitors to Southeast Asia, including Vietnam for many years.

With the planned commencement of a nonstop route between Vietnam and the US and an official General Agent, Bamboo Airways believes this is the right time to promote built-in conditions and take new steps to effectively develop this important route.

As of now, Bamboo Airways is finalizing the various government compliances that are necessary to commence scheduled nonstop commercial flights between Vietnam and the US right project to start in the beginning of 2022 subject to government approvals.

Ahead of planned non-stop services from the US to Vietnam, Bamboo Airways is pleased to announce joining of ARC (Airline Reporting Corporation) starting October 2021 to facilitate sales of its tickets via the US travel reseller channels.

Apart from the US route, Bamboo Airways is also actively promoting activities to expand the international flight network and open more routes to Australia, the UK, Germany, etc., by Boeing 787-9 Dreamliner.

To ensure the seamless reopening of the international flight network and operation of Vietnam – US flights, the airline has cooperated with the International Air Transport Association (IATA) to trial the IATA Travel Pass. This application will be officially piloted on Bamboo Airways’ special authorization flight connecting Vietnam – US on September 23.